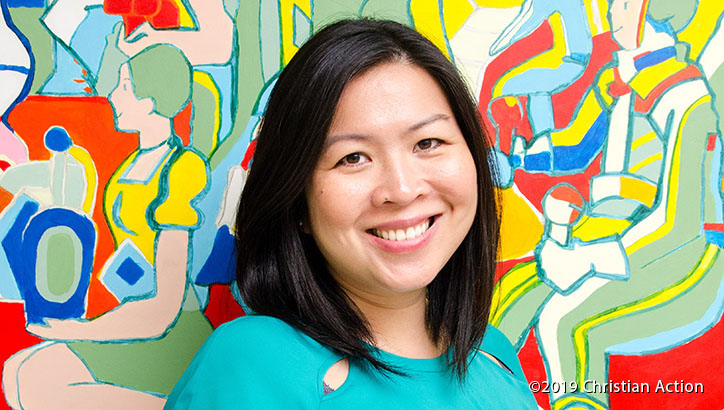 “At times I thought of letting others know about my refugee background, but it was hard to find peace of mind. If refugees were treated equally, I think they would stop struggling with their identities.”

“Last year I attended an exhibition by Christian Action Centre for Refugees (CFR), and I was taken aback when I saw the historic photos. I discovered for the first time that Kai Tak camp, where I spent my childhood, was managed by Christian Action, even though I’ve volunteered with the Centre for Refugees for two years.” Farah and her family are Vietnamese Chinese. Due to severe anti-Chinese sentiment in North Vietnam, her parents fled to Hong Kong in the 1970s and lived in Kai Tak Vietnamese Refugee Camp. Farah was born in Hong Kong in 1981 and grew up in the camp. Eventually, the whole family was resettled in the United Kingdom. It never crossed Farah’s mind to return to Hong Kong and, much less, to volunteer for CFR.

The Days in Kai Tak Camp
Farah lived in the Kai Tak camp until she was 10 years old. Her mother operated a hawker stall in the camp selling Vietnamese and Chinese food. Every morning at 6 am, Farah and her brother would help their mother set up the stall. After enjoying pork bone congee prepared by her mum, Farah would attend classes at New Horizons School, the former headquarters of Christian Action. After school, she’d return to the stall to have lunch and help her mom. During her free time, she participated in crafts and cooking activities in the camp.

“My family has eight members, and even though we were in a confined space I still made lots of friends. I was happy, and that place was like home!” Farah left Hong Kong feeling tearful and bittersweet as the camp she left behind was filled with happy memories of her childhood.

I had a chip on my shoulder
Farah’s transition to a new life in the United Kingdom was fairly smooth. She didn’t experience any problems at school as the education received at the camp had given her a good foundation. “When I first started school in the UK, I was already the top scorer in the mathematics class. I also made great strides in my English language skills!” she said.  Farah completed her secondary and university education with the help of scholarships and part-time work. She eventually became a chartered accountant and worked in investment banking.

While life was going well, Farah still had a chip on her shoulder about her refugee identity. “From the day I arrived in the UK, I never acknowledged I was a refugee with my friends and co-workers, as I was worried that they would discriminate against me.” Identity is challenging for refugees, and after experiencing those challenges, Farah began to open up more after she reached the age of thirty.

I remember my past, and I want to help refugees.
Farah’s husband had to relocate to Hong Kong for work and she decided to accompany him, moving back to her birthplace. Three years ago, Farah started searching for organisations that provide services to refugees, and through this discovered Christian Action and became a volunteer at CFR, where she now makes lunch for refugees on weekends.

In the future, Farah plans to open a Vietnamese coffee shop where part of the proceeds would go towards refugee causes. “Refugees have a low social status in Hong Kong, and the impression of them is rather negative. In the end, refugees are like you and me, and when given the chance, they will flourish just as I have!”

This is a story of fate and destiny – a little girl who lived and grew up in the in the Kai Tak camp now serves the vulnerable at Christian Action.